skip to main | skip to sidebar

MY LITTLE SWEETHEART and PORTRAIT RECOMMENDATIONS 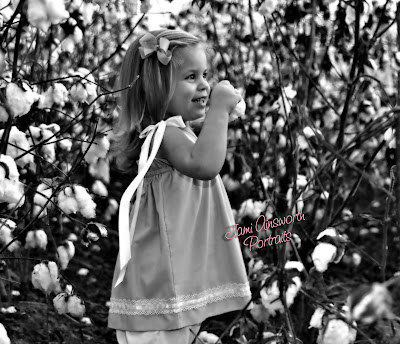 MY LITTLE SWEETHEART, NATALIE POOH!
A recent image (October 1, 2007) of Natalie, before she had her first hair cut...

AGES THAT I RECOMMEND FOR FORMAL PORTRAITS FOR INFANTS: I recently had someone to email requesting images of a 5 month old. I could probably dig a little deeper to find some 5 month...but most would be 4 mos. or 6 mos. I recommend babies to be photographed at intervals of milestones rather than age.

THE FIRST IMAGE IN THE GROUP OF POSTS IS A PRETTY RECENT PHOTO OF NATALIE, MY GRANDDAUGHTER, MOST PEOPLE WHO KNOW ANYTHING ABOUT MY BUSINESS KNOW ABOUT HER. SHE IS MY LITTLE SWEETHEART...HER POPPA'S LITTLE PRINCESS. RECENTLY, I WAS WORKING ON SOME OLDER IMAGES OF NATALIE FOR A SPECIAL PROJECT...THESE OLDER IMAGES ARE ABOUT THE AGE OF THE ABOVE REQUEST. NATALIE IS ALMOST 6 MONTHS OLD IN THESE. THIS WAS MY FAVORITE TIME TO PHOTOGRAPH HER...I WILL HAVE TO GO THROUGH MORE FILES TO ADD LATER. IT WAS MY FAVORITE AGE BECAUSE SHE WAS STRONG ENOUGH TO SIT UP, BUT NOT ROLLING FAST OR CRAWLING YET! ONCE THEY GET MOBILE...LIFE CHANGES FOREVER AS YOU KNOW IT!
Natalie: 9 mos.
I just realized she was older in the photo when I was going to list the age. I noticed it because the pink onsie with the cotton logo was purchased in Memphis at annual farm and gin show. It is always the first weekend in March. Thus I knew she was older than 6 months because she was 7 mos old the first time we went after she was born. 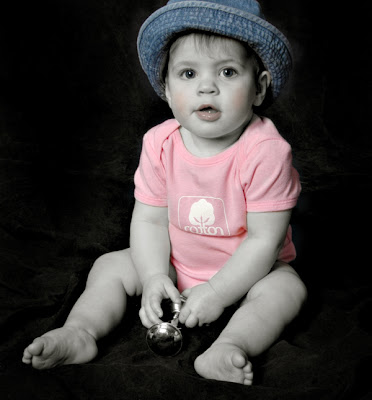 I did photograph Natalie at the usual recommended time frame, but I found there wasn't enough time between sessions to get images edited, ordered and back before the next age. This was actually part of her 9 month portrait. I never really finished editing these because I did her birthday portrait with her eating her cake for her invitations for her first birthday party a few weeks later (about 6 weeks before her first birthday). So these were put on the back burner, because of the party plans and next the formal one-year portrait that we did in Hot Springs, Arkansas, because we happen to be there on a gin trip/vacation trip. I will have to post some of those soon too. 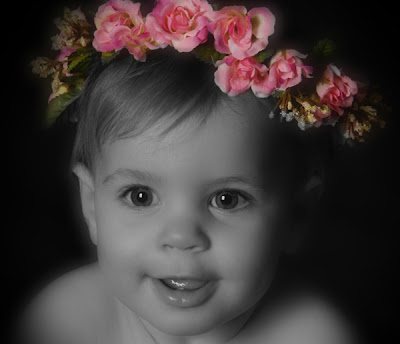 ANOTHER ONE: I love my flower babies! 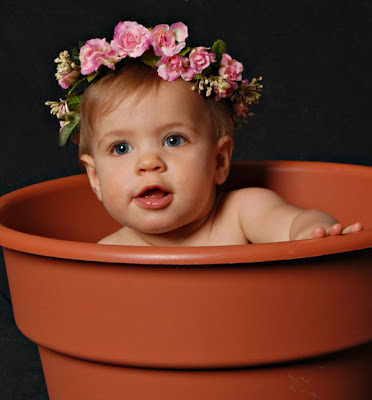 I have played with some of the 9 month portrait images, but I never order wallets, 5x7 and 8x10 for family because I did those of the birthday session so soon afterwards. They are also some of my favorites images and ideal age to photograph her. She learned to sit very early...sitting really good by 5 mos., but she was a little later on the crawling and rolling which gave her a larger window of the ideal age to photograph an infant. Babies do learn things at such different rates...some babies (I think mind did) will learn to roll before sitting and even some learn to crawl before sitting.

This one is actually from one of several sessions that I did at 6 mos. 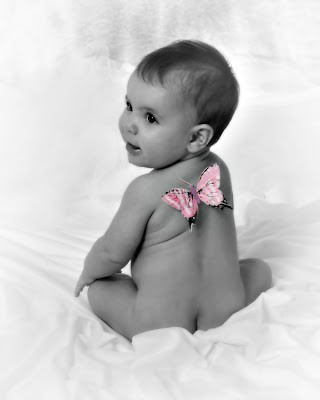 THE ABOVE IS IMAGE IS ONE OF MOMMY'S FAVORITES TOO. I DO THINK I DID DO SOME WALLETS OF THIS ONE FOR MY WALLETS PORTFOLIO THAT I KEPT ON HAND WHEN SHE WAS YOUNGER TO SHOW OFF MY LITTLE SWEETHEART!

I hope you enjoy view these images of Natalie. I am sure you won't enjoy them as much as I do, but who could resist falling for that beautiful and even that cute little bottom!---Jami

Posted by Jami Ainsworth at 4:40 PM

Jami Ainsworth
Frogmore, Louisiana, United States
I started blogging on August 29, 2007. My first blog was for My Little Sweetheart. Her daddy moved to Baton Rouge and it was way for him to keep up with what's going on with her while he was away at school. Then a few months later, I started one for Jami Ainsworth Portraits and the some time later, Worth Remembering...because anything worth blogging is worth remembering! Bloggin is way for me to document, share, inspire and remember special moments. I have not always made it a priority to blog, but I hope that has changed.